The Answer To Affordable Housing Could Lie Within a 3D Printer 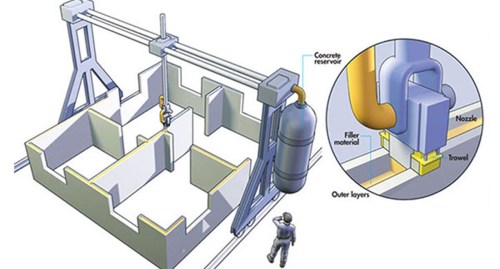 Forget waiting weeks or months for your new home to be ready. Researchers from the University of Southern California created a 3D printer that can build a 2,500 square-foot house in 24 hours.

Since 2008, Professor Behrokh Khoshnevis has led a research team in the creation and development of a new layered fabrication technology using 3D printing called Contour Crafting. Instead of using thermoplastics, a common material used in 3D printing, the robot applies layer after layer of concrete to construct straight and curved walls, as well as domes.

The process involves a giant robot with a hanging nozzle and a flexible arm on a gantry-type crane — the whole rig is known as a “contour crafter” — above the foundation. The contour crafter then proceeds to layer concrete based on a computer-generated pattern. The layers eventually take shape into walls, embedded with all the necessary conduits and passages for electricity, plumbing and air conditioning.

The research team envisions a future where contour crafters could be used for disaster relief to build emergency housing and to create affordable housing for those who are displaced, homeless or in desperate living conditions.

“At the dawn of the 21st century, [slums] are the condition of shelter for nearly one billion people in our world,” Khoshnevis told MSN. “These buildings are breeding grounds for disease — a problem of conventional construction which is slow, labor intensive and inefficient.”

Additionally, they have their sights set on building structures and colonies on other planets as an answer to swelling planetary population problems. With current research funded by NASA and the Cal-Earth Institute, the team is investigating the application of Contour Crafting in building structures like landing pads, roads, hangers and habitats on the moon and Mars.

Filed Under: Uncategorized
← Adding Closet Space Where There Is None
6 Things Sellers Need To Hear Before Listing →