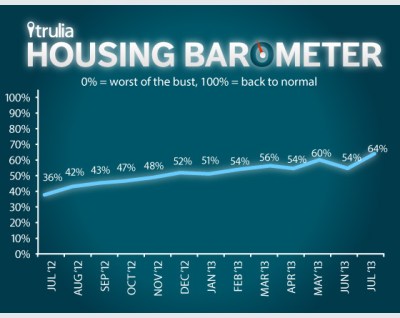 From Trulia - Each month, Trulia’s Housing Barometer charts how quickly the housing market is moving back to “normal.”  We summarize three key housing market indicators: construction starts (Census), existing home sales (NAR), and the delinquency-plus-foreclosure rate (LPS First Look). For each indicator, we compare this month’s data to (1) how bad the numbers got at their worst and (2) their pre-bubble “normal” levels.

Averaging these three percentages together, the housing market is now 64% back to normal, compared with just 36% one year ago.

But the recovery is not only moving ahead; it entered its third phase this spring:

The fourth phase – which will begin when young adults finally startmoving out of their parents’ homes, boosting household formation – is yet to come. Until this happens, construction and new home sales will remain well below normal – even though prices and existing-home sales are now very close to their normal, sustainable levels. 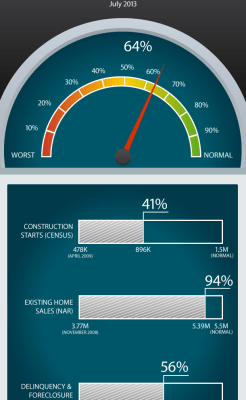