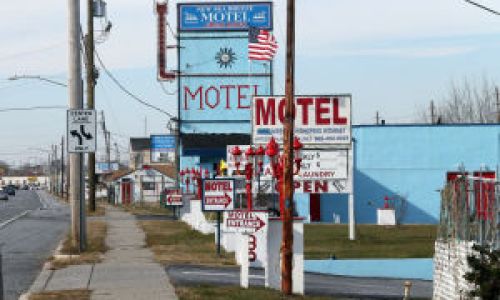 Egg Harbor Township plans to rebuild its gateway to Atlantic City by getting rid of the old motels in the area, following through on ideas that have been discussed for 20 years.

An assessment in 2009, funded with a $30,000 grant from the Casino Reinvestment Development Authority, analyzed the possible uses for the land in West Atlantic City, township Administrator Peter Miller said in a phone interview Tuesday.

In addition to a variety of uses, the township is willing to allow taller buildings in the area, since the low-lying land floods frequently, Miller said. Taller buildings would allow developers to take advantage of the bay views facing Brigantine and Ocean City, and provide the township with something new.

“Each developer has their own vision of what would work best here,” Miller said.

The township has started the first phase of improvements to West Atlantic City by agreeing to purchase four motel properties. The purchases will be discussed at the Dec. 18 Township Committee meeting.

“If you’ve driven through the area, there are old, decrepit, dilapidated, post-World War II buildings,” Miller said. “The buildings sit below the flood level, so when a northeaster or hurricane hits the area, it always gets flooded. They have had issues over time with drugs and prostitution. (The Black Horse Pike) is one of three gateways to Atlantic City, so we need to build a better impression.”

Not everyone is happy with the proposed purchases, however.

What the township and others find aesthetically unappealing, some business owners see as quality real estate.

“My property may be 40 years old, but it’s made from concrete blocks. It’s stronger than wood frames that they use these days,” said Amit Chokshi, who owns the Hi Ho Motel on the pike.

“What happens when you buy a (home built in) the 1960s or 1970s? You make it nice and put in an HDTV inside, but the outside usually stays the same,” Chokshi said.

That’s what the “decrepit” motels are like, he said.

The township has offered to buy four properties — the Golden Key, Star, Fortune Inn and Hampton’s Motor Lodge — and two others are pending, Miller said.

The four acres of property on the north side of the pike, including the four properties and an empty lot, are the first phase of four planned purchases — a total of 16 acres with 13 motel properties, Miller said.

Ashwin Patel, owner of the Hampton’s Motor Lodge, said he is losing both his business and home in the deal.

He has lived in the back area of the office building for 10 years and said he has to now start looking for a home — preferably in Egg Harbor Township to allow his children to remain in the school district.

The township offered Patel $400,000 for the property, about $1,000 less than the assessed value of the property 10 years ago when he moved in, he said.

Patel has completed renovations, including $80,000 worth on two buildings after Hurricane Sandy brought four feet of water into the buildings.

“Quite a few claim what the township has offered is less than what they paid,” Miller said. “After the 2008 crash, (the real estate market) hasn’t recovered. Even if you look at Atlantic City and the White Horse Pike … all the motels are having problems filling rooms. Motels on the south side of the Black Horse Pike are franchises, and they are also struggling. We told them if they find a better offer on their property, they can go ahead (and sell).”

Those who haven’t signed on to the township’s offer say the amount on the table is too low. They add that they can still run a viable business, Miller said.

Chokshi, a lifelong resident of the township, said the motels on the Black Horse Pike do better than those on the White Horse Pike — which is why the motel owners previously had always been able to find buyers.

“The township is hitting at the lowest price. Those (moteliers) who are agreeing with the township are those who are done” dealing with problems the township ignores, Chokshi said.

In addition, the assessment of the land and property was done this past spring, after Sandy, Chokshi said.

Chokshi is adamant that the township has purposely ignored the pike motels.

“There is a restaurant that has been shut down since I’ve been here, for about 30 years,” Chokshi said. “They have a lot more work to do than just purchasing motels.”

Mayor James “Sonny” McCullough said the site of the former Log Cabin restaurant is in tax foreclosure and is considered an eyesore by the township.

Choksi also referred to the unsolved case of the bodies of four women found shoeless behind the Golden Key in November 2006. Chokshi said that if the township had maintained the land it owns behind the properties, and if police patrols in the area were more frequent, some problems would solve themselves.

Miller responded by saying the business owners could “be more selective with clientele to avoid crime issues.”

Sunny Patel, who owns the Golden Key and Star motels, said he is happy with the deal and he is able to get out of the business. McCullough has previously said the township anticipates paying $700,000 for Patel’s properties.

The buyout option is very appealing, said Dilip Patel, who owns the New Sea Breeze Motel. If the township came to him with an offer, he would take it, he said.

After spending $50,000 on repairs and opening less than three months after Sandy, Patel said the expense is hardly worth it.

“Business is poor here,” he said. “There’s no point in hanging on.”

“These property owners put in a lot of time and effort and do a lot to maintain it themselves. And every five years they are inspected by the state, so if they were not maintained well, they would be shut down,” Chokshi said.

The township plans to use a $3 million CRDA grant from 2005 to purchase the motels, which would be redeveloped into mixed-use, commercial and residential properties.

The township would use the proceeds from the first round of sales to developers toward agreements to purchase the next lot of motels, Miller said.

But what if the motel owners don’t want to sell?

“We don’t want to see those who choose to remain be unsuccessful. As many problems as we have had, they are businesspeople trying to make a living. They are paying taxes and are part of township ratables,” Miller said. “The ultimate goal is to buy the entire strip.”

Filed Under: Uncategorized
← How to Approach Real Estate In 2014 & Beyond
Fix Now, Save (A Lot) Later →