I Live In A Bank 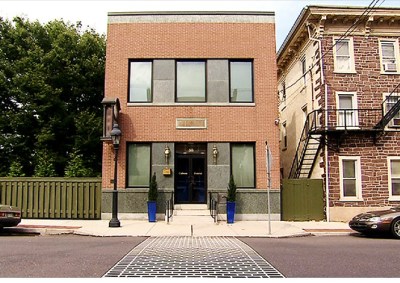 Cathy Calhoun turned an old bank that she used to work at into a spectacular home.

In 1989, the jewelry store owner paid $52,000 for the vacant bank building in Spring City, Pa. She has spent the past 24 years renovating and re-purposing the space to include a fully-stocked bar, a sauna and an entertaining space in the old lobby.

The building — which was originally built in 1872 — has a total of about 5,200 square-feet of living space. There are three bedrooms and three baths, with many old fixtures and spaces that have been kept and reimagined. For instance, Calhoun turned the old “coupon room,” where affluent bank clients used to clip coupons from their bearer bonds, into a powder room.

When the original Seth Thomas street clock that used to project out over the front doors was returned it to its place of honor, the unveiling attracted half the town. “People were crying,” said Calhoun. “They remembered as children telling time by the clock.” 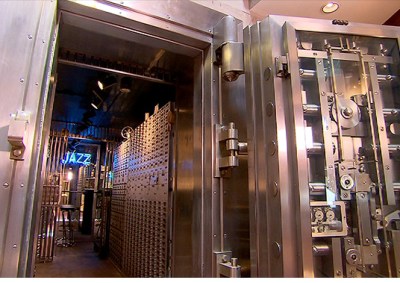 Calhoun knew right away what she wanted to do with the old main vault — convert it into a bar. She removed a wall of safe deposit boxes to free up seating room, but left the other wall of boxes intact.

All but 222 of the safety deposit boxes have been opened (there are no keys for the ones that are locked).

People left the darnedest things in them — like used spectacles. She also found more common objects, like old coins and bank notes. There were also stock certificates, ledgers and savings passbooks, some of which had handwritten deposits of as little as 10 cents, she said. Calhoun saved some to display as memorabilia. 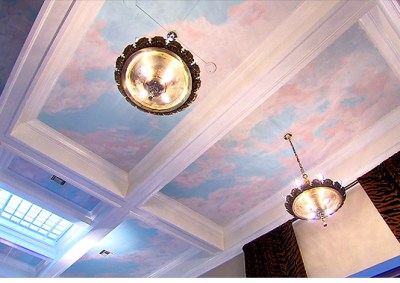 She also hired a ceiling painter to duplicate the pink clouds and baby blue skies commonly seen in the Pennsylvania countryside at sunset.

She kept the old double entrance doors but playfully gold-lettered “Calhoun Federal” on them, which confuses some people. Potential customers still knock on the doors to inquire about banking services.

“I always tell them, ‘deposits only,” said Calhoun. 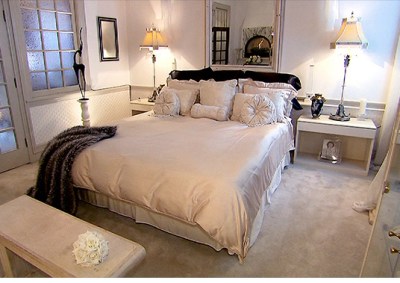 Calhoun left the entryway to the old boardroom intact and made it her master suite.

She had to do very little to restore the bedroom area. She just had it spackled and painted, and added a large, luxurious bath. It’s her favorite part of the house.

“I’m always in there” said Calhoun. “It’s two stories high, has seating, a fireplace, a Jacuzzi and a big-screen TV.” 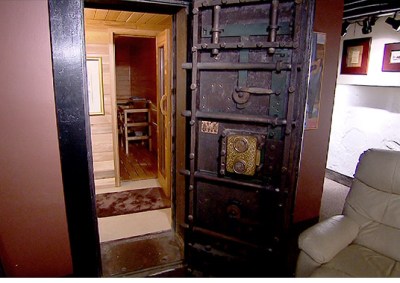 Calhoun knew the bank well from her 10 years of working there. She dreaded going into the grungy basement vault to retrieve the night deposits.

These days, the space has been transformed into a plush sauna with a door from the original vault. There’s also a hidden room in the basement where, the local historical society believes, the old bank note printing press survives.

“Rather than carry out the old press, they concreted up the whole room,” said Calhoun. “Breaking into that space is my next project.” 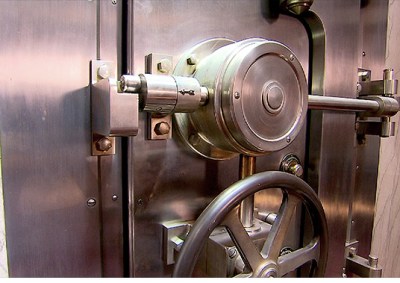 The old brass and the steel vault doors only need to be cleaned with a bit of Windex. “They have always looked the same, even when I was working here,” she said.

But Calhoun found the marble and granite walls covered with layers of dark grime. They cleaned up real nice, though, even revealing the veining in the marble.

The walls are three-feet thick and keep the home cool in the summer and warm in winter.