Are we still heading toward 5% mortgages? 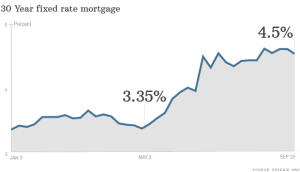 Prospective buyers who have been shying away from the housing market due to rising rates may have reason to start shopping again.

From cnnmoney.com – On Wednesday, the Federal Reserve surprised market watchers when it announced that it would not start tapering its purchases of mortgage-backed securities and Treasury bonds.

Mortgage rates have risen significantly amid concerns that the Fed would cut back on its $85 billion a month bond-buying program. Rates on a 30-year fixed mortgage are currently averaging about 4.5%, up from 3.35% in early May. That rate increase has meant an extra $132 a month in payments for a homebuyer with a $200,000 30-year loan.

But now that the Fed has said it will continue to purchase the bonds, rates will likely retrace some of those gains, said Keith Gumbinger of mortgage information provider HSH.com.

“Now, we do have some space for rates to fall,” he said. “I don’t expect a plummet, just a drop of 0.1 percentage points or so over the next week or two.”

The day after the Fed’s announcement, Freddie Mac reported that rates on 30-year fixed-rate loans fell from 4.57% to 4.5% over the past week. Freddie Mac’s chief economist, Frank Nothaft, said rates were reacting to the same economic trends that influenced the Fed’s decision.

Among them: slowing growth in retail sales and industrial production and the lowest reading in consumer sentiment since April. He also noted tighter financial conditions, including the sharp increase in mortgage rates in recent months.

Should the economy gain more momentum, however, fears that the Fed will taper off its bond purchases will most certainly resurface and rates will move higher again, he said.

Nothaft expects rates to hit about 5% by mid-2014. That’s an increase of less than $24 a month for every $100,000 borrowed — enough to weed out borrowers who are struggling to afford homes but not enough to impact overall demand.

Despite recent increases, rates are still low by historical standards. During the housing boom years, they typically ranged between 6% and 7%.

And higher rates should prompt some banks to ease up on their lending standards, helping more people to buy homes, said Jed Kolko, chief economist for Trulia.

“Rates will be slightly higher next year but not enough to derail the housing market recovery,” he said.

Filed Under: Uncategorized
← Dig these 6 awesome underground homes
5 Perfect Rooms to Curl Up in this Fall →