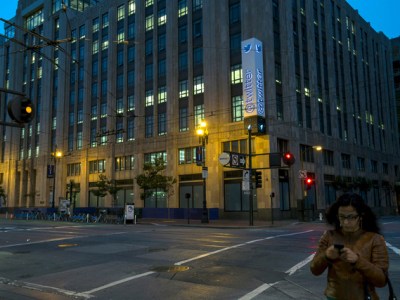 From the NYTimes - The middle stretch of Market Street here has befuddled mayors, investors and entrepreneurs for decades.

Studded with check-cashing joints, strip clubs and dollar stores, the seven-block strip known as the Mid-Market had resisted cleanup efforts and resolutely remained the same: a seedy place to visit day or night. Even the area’s community groups said they were fearful.

Mid-Market is home to some of the highest vacancy rates in the city for office or retail, despite its proximity to City Hall, which is a few blocks away.

So it seemed implausible that a young company, heralded as one of the technology industry’s next big things, would want to make its headquarters in Mid-Market. But in April 2011, that young company, Twitter, dispelled rumors that it was leaving San Francisco for a nearby city suburb and instead announced it was relocating to Mid-Market. In June 2012, it moved in.

Twitter leased space from Shorenstein Properties, a real estate firm based in San Francisco, known for its blue-chip office towers in the Financial District here. Shorenstein bought an 11-story building in 2011 fronting Mid-Market that had been vacant for five years. For them, it made sense to buy the undervalued Art Deco landmark built in 1937, which had some of the most spacious floor plans in the city at a time when office space was tight. Twitter signed a lease until 2021 for 295,000 square feet in the building and could expand that as its work force grows. “In our gut, we believed if we changed it, they would come. We thought it would be a real catalyst for the neighborhood,” said Charles W. Malet, chief investment officer for Shorenstein Properties.

Now 15 other companies, like Spotify, Square and Yammer, emboldened by Twitter’s move and a city tax incentive that largely exempts them from city payroll taxes if they relocate to the Mid-Market, have committed to take 1.3 million square feet in the area, which the city has renamed Central Market. Apartment towers with 5,500 units are in the works, and arts groups, chefs, retailers and even a venture capital firm have taken up residence.

“You had a once vacant and blighted area that is now a gravitational center for some of the most innovative companies in the world,” said Todd Rufo, director of the San Francisco Office of Economic and Workforce Development.

Not to be outdone, the rest of San Francisco is in the middle of an impressive building boom. Developers are building office towers downtown for the first time in five years, many confident enough to build without signed leases for the space. Other buildings are undergoing extensive renovation. Branches of technology companies, old and new, like Google, Amazon, Microsoft and Yahoo, are expanding or moving to the city and now make up more than half of demand for office space. (During the tech bubble in the late 1990s, tech accounted for only a quarter of demand.)

In 2013, San Francisco became the second-most-expensive city in the country, behind New York, in which to rent office space. Rents rose from to $53.84 per square foot from $46.12 in the third quarter, according to C.B.R.E. Vacancy levels stand at 8.2 percent, down from 9.7 percent the same time last year. Four years ago, it was 15 percent.

Tishman Speyer is betting heavily on the city by starting construction on two speculative office buildings with debt-free financing. After buying a parking lot in an area called South of Market, or SoMa, the firm began building the city’s first speculative office tower since the recession.

Nearly 18 months into construction, Neustar, a data analytics company, agreed to lease four of the building’s 10 floors to consolidate its Bay Area offices.

Tishman Speyer is also gambling on another former parking lot, where a 26-story office tower is taking shape and should open in two years. No leases have been signed yet, but Mr. Speyer said the decision “took less courage than others.”

Mr. Speyer added: “There were literally no construction starts, vacancy was dropping into the low single digits and rents were increasing 30 percent a year. It was obvious to us the market could support not just one but several buildings.”

The emphasis on San Francisco signifies how Silicon Valley, an area extending south from just below San Francisco to San Jose, Calif., no longer has a grip on technology companies. About 18 months ago, tech companies started moving or expanding here to be closer to their employees.

Venture capitalists, traditionally sequestered in the valley to be close to start-ups and entrepreneurs, are also setting up outposts in San Francisco. Some of the biggest, like Kleiner Perkins Caufield & Byers, have opened offices here to give them a place to incubate their seed companies and to hold events to meet new ones.

Christina Lee, a marketing and communications partner at Kleiner Perkins in Menlo Park, Calif., said “the partnership is more active in the city than in the last four decades.”

The tax incentive offered by the city gives companies moving to the Mid-Market neighborhood a break from paying the city’s 1.5 percent payroll tax for six years on employees hired after its move. Before the city passed the incentive, it was estimated Twitter would save about $22 million over six years. The city would not provide updated savings figures, saying it was confidential information.

The city also now offers all companies a tax break on stock options when they are exercised. And now that Twitter is poised to issue its initial public offering next Wednesday, some analysts have estimated that San Francisco could lose millions of dollars more in revenue if Twitter’s employees begin cashing in their options.

Karen Wickre, a spokeswoman for Twitter, defended the tax breaks the company had received. “The mayor and board of supervisors realized the existing tax structure taxed job creation, so to keep start-ups like ours in the city, they created a limited exemption for the Mid-Market zone,” she said. “The tax exemption was certainly a factor, but so was the chance to stay in the city in a landmark building.”

Although the payroll tax break gets much credit for drawing companies to the neighborhood, its spacious buildings also attracted companies at a time when the vacancy rate in SoMa, where many of the tech companies have opened offices, is 3 to 4 percent, according to Jones Lang LaSalle, the real estate services company.

So the Mid-Market area began to look attractive to developers. TMG Partners and DivcoWest, San Francisco real estate firms, bought a 16-story 354,000-square-foot government building in 2011 a block away from Twitter’s new office. Even though it is outside the payroll tax exclusion zone, the company renovated it for leasing. Dolby Laboratories, the audio company, agreed to purchase it for $110 million in 2012.

“People look at that and say, ‘What a deal,’ but we saw a transitioning neighborhood and foresaw it taking off in three to five years, not two,” said Matt Field, a managing director at TMG Partners. With 700 employees scattered in three aging rental buildings in San Francisco, Dolby needed a central building and did not want to leave the city where it was founded. Very few buildings were large enough and could be renovated for laboratories.

“You really have to be looking forward if you’re buying this building in this neighborhood. We’re buying for the future,” said Lewis Chew, chief financial officer for Dolby.

Across the street from Twitter, Crescent Heights, a Miami developer, is erecting a 754-unit apartment complex that is the biggest of the new residential developments in the neighborhood. Its first 26-story tower opened last month, and a second building, with 37 stories, will open next year.

After Twitter announced it was moving to the area, the developer scrapped its original plans and tailored the apartments for the tech workers who would be employed nearby. Residents of NEMA, short for New Market, as the development is called, will have amenities like a saltwater pool, landscaped terraces, valet parking and dog-walking services.

“We wanted to participate even more in the renaissance of the area. We wanted to set an example and provide the most creative offerings,” said Bruce Menin, principal at Crescent Heights.

Filed Under: Uncategorized
← Tips For Buying An Older Home
This Is What The Ten Most Expensive Real Estate Markets Look Like →